How Bad can Bad Writing Be?: Norman Bogner’s Spanish Fever

I picked up a book in a charity shop a while ago, I’m not sure where or when, an old 60s paperback. Spanish Fever, by Norman Bogner. It had a cheesy cover, of the sort typical of those times at the dawn of the sexual revolution when any book that hoped to fly off the shelves shamelessly played up how ‘provocative’, salacious, all-over naughty it was going to be. And the title caught my eye. It was apparently a novel about a bunch of expats in Barcelona in the early 60s, and the blurb promised outrageousness and hilariously funny escapades. I used to live in Barcelona, and am interested in the micro-genre of Barcelona expat literature. So I bought it. 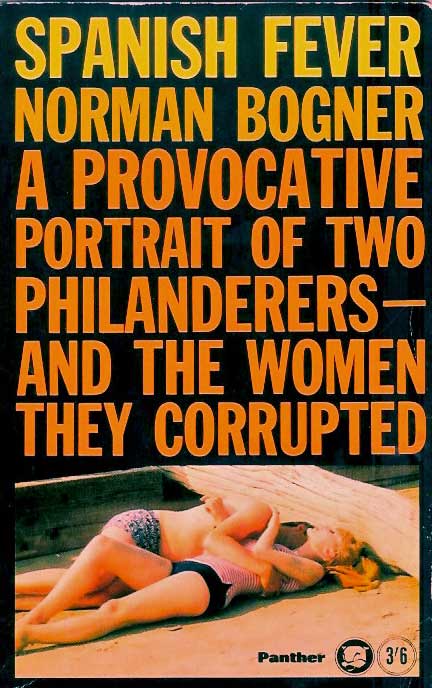 Spanish Fever first appeared in hardback in Britain in 1963, and the paperback is from 1966. I’d never heard of Norman Bogner, so looked him up, and found that far from having disappeared into a Ramblas dive he’s still very much around, with a website and a long Wikipedia entry. Some of the claims in his bios are pretty wild, and the text on Wikipedia is virtually the same as his own website. From New York, he did indeed live in Barcelona in the early 60s, and then moved to Britain, where he says he worked as script editor on Armchair Theatre at ITV, an emblematic series in the first ‘golden age’ of British TV (on his website he actually says he ‘ran’ it, which is certainly, er, doubtful). While there he says he also did all sorts of things and ‘discovered’ unknown writers such as Tom Stoppard, Alan Ayckbourn and Dennis Potter (though there doesn’t appear to be any mention of Bogner on anything about them, they don’t actually seem to have written for Armchair Theatre, and Potter in particular did his early work for the BBC, not ITV). But, he has also without question gone on to produce a string of novels, TV scripts and so on, and repeatedly describes himself as a ‘New York Times Bestselling Author’ (though it’s not clear which of his books made the NYT list or when). Since some time in the 70s he’s been back in the USA. But, anyway, after forgetting the book for a while I opened it up, and found…

Spanish Fever contains some of the worst writing ever committed to print.

Its author often seems unaware of the real meaning of words, as when, writing about Sitges, he talks about ‘the stone wall that surrounded the beach’ (the clue is in the ’round’ bit, Norm, the words you were reaching for were maybe ‘lined’ or ‘backed’). He’s very concerned for readers to get the message that these characters are DECADENT, continually courting sin and living life on the wild side, so the text is manically overcharged with adjectives; people can’t even go for a swim without leaving their clothes ‘heaped in an abysmal clump’ (for that underwear to resemble one of the pits of hell, wow, it must have been really grubby). So decadent and extreme are they that no one seems capable of eating a thing without drool running down their chops. Descriptions are often just bizarre, like ‘her breasts naked and painted vermilion jutted out like twin cliffs’. Caramba.

In a video piece on his website Norman confides that he’s never been a great one for research, and he’s not kidding: one of his main characters is a Russian emigré called Sasha, who recalls how his aristocratic family had just sent him to Berlin to study when Lenin and the Bolsheviks shattered all their hopes, suggesting that Bogner remembered the existence of the Russian Revolution but had forgotten the First World War. And while, as said, it is on record that he did actually live in Barcelona at the time, his references to the city and context are fabulously careless too, as when some people drive off after a New Year’s Eve party past ‘sand dunes’ to Mataró, for a moonlight dip before sex on the beach. This road has been lined by villages for centuries, and a railway track since the 1840s, and anyone who went midnight-swimming in Mataró in January would probably need resuscitation from the cold before thinking of hot passion.

Nothing in Spanish Fever rings true, not the setting, nor the language, nor the characters, nor any of the situations. Even when an incident comes close to any sort of emotional authenticity Bogner still manages to miss the spot with some florid passage or overwrought melodrama. The effect and how he sustains it over more than 200 pages is quite unnerving, and weirdly fascinating.

Edward Bulwer-Lytton has for years been parodied as the author of supposedly the worst opening lines to any novel in history, for his elephant of a sentence beginning ‘It was a dark and stormy night…’ But the Victorian sage must deserve more consideration, for compared to him Norman set down a whole new Bogner-standard of bad writing.

And yet he has continued to write away for over 50 years. I admit I’m not being fair here. I haven’t looked out any of his later books, and he may have got better. But a question remains: how did Spanish Fever ever get into print in the first place? (and it was actually his second book, In Spells No Longer Bound having appeared in 1961).  Everyone’s heard of apparently hugely-talented writers who toil away unappreciated for years, receiving rejection after rejection, and sometimes are never picked up at all, and yet Norman seems to have strolled into publication at the first try. Were there no editors at Jonathan Cape or Longman, his first British publishers, back in the early 60s who could recognize complete tosh when they saw it? Was this a drunken joke decided on after an old-style boozy publishers’ lunch? A mystery. We always hear standards have been going downhill, but maybe they were deep in a ditch 50 years ago.