René Redzepi’s contribution to the Dinner for the End of the World, 21-12-12

21 December 2012 was supposed to be the End of the Great Mayan Calendar Cycle. Everybody seems to have heard that, and that somehow this was supposed to mean the end of the world. Global attention was briefly focussed on the Yucatán in particular, where the local powers-that-are, feeling they had to do something, put on a Festival of Maya Culture and inaugurated a gleaming new museum in Mérida (see earlier post). Largely unnoticed, it seemed – the effective publicity was near non-existent – was the fact that René Redzepi of Noma restaurant in Copenhagen was also there to cook a very special dinner with some friends among Mexico’s most original chefs. For the past three years Noma has topped the Restaurant magazine Top 50 poll of global critics as the world’s best, a survey of awesome power in the foodie world, so Redzepi is by most counts the current number-one chef in the world.

He is a huge enthusiast for the Yucatán and its food, telling me several times that he has had ‘a love story’ with the place. He first heard about it from Roberto Solis of Néctar restaurant in Mérida, who worked at Noma a few years ago before it or Redzepi were famous. René himself first visited in 2007, and his passion has only grown ever since. Quiet, affable, genuinely friendly in a very Scandinavian way, he has none of the kind of belligerent egomania that – at least in the English-speaking world – we’ve all been taught to associate with superstar chefs. What he does have is a very proper chef’s obsession with rare flavours and fine produce, and the range of foods he’s seen in the Yucatán, he says, is ‘just mind-boggling’.

René and Noma are famous for drawing flavours out of unlikely ingredients like moss and creating refined food in a cold, wet, northern country, Denmark, that wasn’t thought to have any culinary culture at all, and he seems like a boy let loose landed amid a tropical abundance of fruit, vegetables, strange herbs, funghi and more. ‘When you go to markets in Mérida…’, he says, jet-lagged eyes lighting up, ‘show me a place in England, or in Scandinavia, that has anything similar… the market’s alive, it’s a beating heart’.

Not only that, but, like the Mexican and Yucatecan chefs he worked with in December, he’s on a mission to show the world the true value of Mexican cuisine and produce. As anyone who’s eaten around a few Cancún hotels will know, large-scale food preparation in Mexico is too often marked by the use of bland ‘international’ produce favoured by agribusiness instead of the great rainbow of native ingredients, which are dismissed as ‘old-fashioned’ or too much trouble to produce, source and cook. Internationally, Mexican food is commonly still associated with bland Tex-Mex, cheap, cheerful and always tasting vaguely the same. René himself says he used to hate what he knew as Mexican food. ‘Mexican restaurants are like Irish pubs, they’re everywhere…’, he grunts, looking for something polite to say, ‘but not a lot are like what you experience here… Then when I came here I just fell in love with it, and I want this cuisine to be recognized for what it is, which is one of the world’s greatest mouthfuls’. 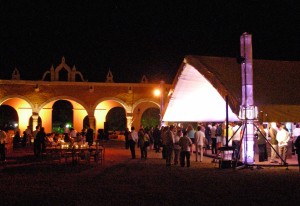 A couple of years ago he and Roberto Solis first talked about the idea of doing something special for the Maya Calendar-ending in December 2012, to celebrate the Yucatán’s foodstuffs at a time when global attention was expected to be focussed on the place. Roberto contacted friends and colleagues among other leading Mexican chefs, who were all keen to join in. As chefs, Roberto says, the natural thing to do seemed to be to put on a dinner. Mexican media heard of it, and it was rapidly labelled the Cena del Fin del Mundo, Dinner for the End of the World. Beyond that, though, publicity was near-zero. The boundary-breaking dinner seemed more of a rumour than a certainty, and even those involved weren’t sure it was going to happen until about two weeks earlier.

But, readers, I can confirm that it did take place, on 21 December, under the stars in the glorious setting of the courtyard of the Franciscan Monastery of Izamal, most charming (everyone always says) of the Yucatán’s colonial towns. And that I was one of a very fortunate 70 or so guests – a little randomly selected, to be honest – who were there for a rare night of special pleasures. Hopefully, it will become legendary, so accounts can become more embroidered as time passes, and I can make more of the point that ‘I was there’. Getting back to the facts, I won’t go into every part of the meal here – each of nine main chefs prepared one course, in an open kitchen erected in the courtyard, and the exceptionally friendly mood among all involved – ‘magical’ was said more than once – enhanced the whole experience. I’ll only describe René Redzepi’s own contribution.

He hadn’t attempted a version of any existing Yucatecan dish, but taken his inspiration from the best things he found in his beloved Mérida markets, deciding what to do with them at the last minute, because ‘I wanted to keep things totally spontaneous…’ It was simply titled ‘Fruits and Vegetables of the Yucatán’. A warm fruit salad, you think. No it’s not, roll the tongue a little further and it’s cold. It’s deeply savoury, but then you get a jab of piercing, cool sweetness from exquisitely fresh watermelon. Textures run from slippery-soft to crisp. In the little bowl there are pieces of mango, yucca, avocado, star fruit, pumpkin, pineapple… each separately pressed, chopped, marinated – the mango in habanero chilli and bitter orange juice, the pineapple in recado negro spice – and then mixed with a fabulous broth that included fermented mushrooms, juice from grilled tomatoes, mint, coriander and other things. A whole elusive collection of eating experiences in one dish, a bravura display of intricate skill and sensibility.

Ah, so this is what get’s you labelled as the best chef in the world.