Whether or not you believe that something very special/awful/whatever is due to happen when the Maya Great Calendar Cycle ends on 21 December 2012, for the Yucatán’s capital of Mérida it will have one lasting presence: a brand new and very state of the art museum, the Gran Museo del Mundo Maya. Pushed through by the previous state administration, it was theoretically opened in September, so that former Governor Ivonne Ortega could cut the ribbon just before she left office, but had to be closed again because it wasn’t ready. It had a second opening last weekend, in time for the ‘Festival of Maya Culture’ launched by the Yucatán government as their part in the international fascination with 2012.

Mérida’s older museums have typically been in gracious 19th-century mansions, but the new Gran Museo is a radical departure with emphatically of-the-moment architecture by the local Archidecture design practice headed by Ricardo Combaluzier, William Ramírez and Josefina Rivas, clearly in the same line as other contemporary ‘destination museums’ like the Bilbao Guggenheim or London’s Tate Modern, in which a spectacular structure and the sense of occasion it creates is as important as what it has inside it. It also departs from earlier local museums in that it’s in the modern suburbs of north Mérida, near the Siglo XXI convention centre, a jolt for foreign visitors who’ve been used to a city in which most of the places they wanted to see were reachable on foot, but maybe closer to the local middle-class public who are probably going to be its main audience.

As in all good destination museums, a dramatic approach is an essential part of the show, which in this case is up an appropriately Maya-style bank of steps, only with disabled access ramps. At the top, the view is dominated by a giant green and grey drum of intertwining girders, apparently evoking the sacred ceiba tree of the Maya, which contains the ‘Sala Mayamax’ for special events and presentations and serves as the stage for a new light show by French artist Xavier de Richemont, which is said to be fantastic, and which I’ll be seeing later this week. 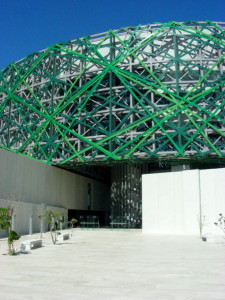 Once beneath the giant ceiba – only from this point it feels more like a giant birdcage, rather like Beijing’s Olympic Stadium – the architectural wow-factor continues, with long escalators taking you up inside a soaring atrium around a massive spiral staircase/liftshaft to the Mayamax, changing vistas and plenty of exposed metalwork to make everything unequivocally contemporary. 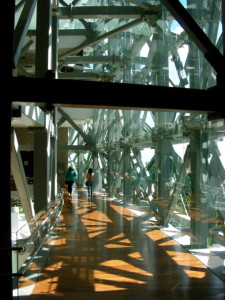 The museum sections as such are actually in the much more prosaic buildings around the bottom, but visual fireworks continue inside. As said, this museum is state-of-the-art, and it seeks to show just about everything there is to show about the whole history of Yucatán and the Maya in a vividly visual manner with a strong sense of theatre. As you enter you are ushered into a darkened room for an audiovisual on the age of the dinosaurs and its ending by the meteorite strike at Chicxulub, just north of Mérida, that created the unique Yucatecan landscape. In the next rooms there are meteorite fragments and much more on geology. Beyond that, the museum takes the radical step of dealing with Maya history backwards, beginning with the ‘Maya of Today’ and going on through the colonial era before reaching the ‘Ancestral Maya’, the ancient cities everyone has heard of. This means that unusually for a Maya museum it begins filled with colour, with embroideries, village altars, and other folk arts. Charming embroideries from the town of Maní illustrate topics such as the blend of modern and traditional medicine in Maya villages today. 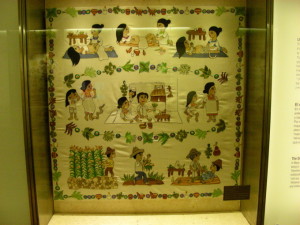 It’s hard to think of any aspect of the Maya that isn’t touched on somewhere in the museum,as you’re almost bombarded with sparkily-presented information – beekeeping, how modern Maya make a living, landholding in colonial times, or, on the ancient Maya, warfare, child-rearing, the salt trade, cosmic visions and so on. The early-1900s chicle trade is even represented by whimsical Whites’ Yucatán chewing gum boxes, and there’s a complete facsimile of the Madrid Codex, one of only four pre-Conquest Maya manuscripts in existence. Everywhere, artefacts are intermixed with interactive and audiovisual displays, such as electronic info boards where you can ask questions like ‘were the Mayans socialists?’ (No) or ‘Is there a Mayan end of the world?’ (No), or enter your birthday and get a Mayan calendar date back (of which there should be more than one, since every kid who visits wants to do it). 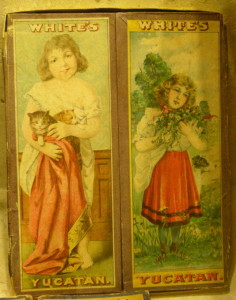 An impressive amount of thought has gone into this museum, and the main, big audiovisual rooms are among the best you’ll find anywhere, sophisticated and visually compelling. They’re out to fascinate and inspire wonder, and generally do it. The one on the ancient Maya cosmo-vision, for example, manages to convey a range of complex concepts – the basic divisions between the heavens, this earth and the underworld, the ceiba tree as world-axis – with remarkable clarity in just about 15 minutes.

Stunning as it is the Gran Museo could be seen as a bizarrely extravagant gesture for any Mexican state to pursue on its own, but hell, it’s done now. It’s also curiously radical: the sections on the position of the Maya in colonial times, or the 1840s Caste War when they revolted on a massive scale and nearly took the whole Yucatán back, don’t pull punches in their presentation of the Maya as an ‘expoliated people’ who since the 16th century have determinedly ‘defended their identity’. Among the exhibits is a reconstruction of the imposing face of Bernardino Can, a rebel Maya leader who was killed in 1875. After his death his head was cut off and the skull exhibited in an earlier Mérida museum, and the scientific reconstruction was made from it. A Yucatecan archaeologist has pointed out to me that this exaltation of indigenous people as the radical essence of the nation has been part of the standard discourse of Mexican officialdom ever since the Revolutionary 1920s, but it still seems odd to see it in affluent north Mérida in 2012.

There are some other features of the Gran Museo: it’s far more expensive than most Mexican museums (currently 150 pesos for foreign visitors), with different prices for foreigners, other Mexicans (lower) and Yucatán residents (lowest). And while the general labelling and interactive panels are all in Maya, Spanish and English, the real stars of the show, the big audiovisual rooms, currently have commentary in Spanish only. This may be an oversight due to the speed with which the museum had to be finished, but if they want to get more foreign visitors they’ll have to add English and other languages soon.

And as usual in Mexico, it has its controversies. This is a project put together entirely by Yucatán state, with virtually no participation by the usually all-powerful federal INAH (Instituto Nacional de Antropología e Historia), hence the pricing. So far, the Gran Museo’s audiovisuals tend to overshadow its actual exhibits, but – contrary to appearances – it is not actually entirely finished, and the ambition is for it to absorb the whole of the impressive Maya collection of Mérida’s INAH-run Anthropology Museum in some more, yet to be complete sections. It already has some major parts of the older collection, and the old Museum closed a few weeks ago, but whether the Gran Museo eventually gets all it wants (including some other artefacts from the Yucatán now in Mexico City) will be a matter of negotiation, accusations, counter-charges and so on.  This also leaves open the fate of the Mérida Anthropology Museum’s former home the Palacio Cantón, the extravagant 1909-11 wedding cake mansion by Italian architect Enrico Deserti that is one of the city’s most grandly indulgent buildings. It’s said it’s going to be an exhibition centre, or a new museum of colonial Yucatán, but rumours are rife, and nobody seems to know exactly.

4 comments on Fresh out of the museum blocks: The Gran Museo del Mundo Maya, Mérida, Yucatán